During World War II, the Japanese blocked the US from importing rubber. The government asked the chemical industry to find a substitute. James Wright, an engineer working for General Electric, created a polymer from silicone and boric acid. Dr. Joe Schwarcz describes what happened next in his book The Genie in the Bottle

The pliable mass could be rolled up into a ball and bounced 25 percent better than a comparable rubber ball. Here was the desired property. Unfortunately, the substance had some undesirable properties as well. When you hit it with a hammer, the stuff shattered; when you pulled it quickly, it broke apart. A fascinating but useless substance.

GE sent samples to engineers around the world, hoping to find a suitable application. Then, in 1949, some of the putty fell into the hands of toy shop owner Ruth Fallgatter. Although it outsold everything in her shop's catalogue (except for Crayola crayons), Fallgatter lost interest. But the marketing consultant she hired, Peter Hodgson, repackaged the gooey slime in plastic eggs and Silly Putty was born.

Yesterday I took the kids to the Schenectady Museum for the second in a series of science workshops for local homeschoolers. (Schenectady, of course, was once GE's "Electric City," and the museum is home to lots of GE memorabilia and Edison artifacts.) This month's topic was chemistry, and one of the hands-on projects the kids got to do was to make a version of Silly Putty from Borax (a type of laundry soap) and Elmer's

glue. This is a standard little-kid chemistry demo; there were three booths featuring it at last month's New York State Museum Chemistry Week event. (Here is about.com's recipe.) Unfortunately, given the current trend away from experiments involving any degree of risk, it also seems to have become a standard big-kid chemistry demo as well.

The homeschool workshop description talked about having the kids make several types of putty and recording their observations (how high they bounced, etc.) I thought maybe they would be using different formulas. (For instance, there are a variety of recipes here.) What they did was give the kids was different concentrations of borax and glue. John came home with a bag of goo; Anthony didn't have time to finish all three versions, so he didn't end up with a playable mixture. We'll have to do this again at home.

Considering that this program was for kids up to age 14, it would have been nice if they included a few more facts, too. Such as the chemical names and formulas of the different substances the kids used. So here is a look at Borax (sodium borate - Na2B4O7) and the Elmer's Glue ingredient polyvinyl acetate, courtesy of Wikipedia. 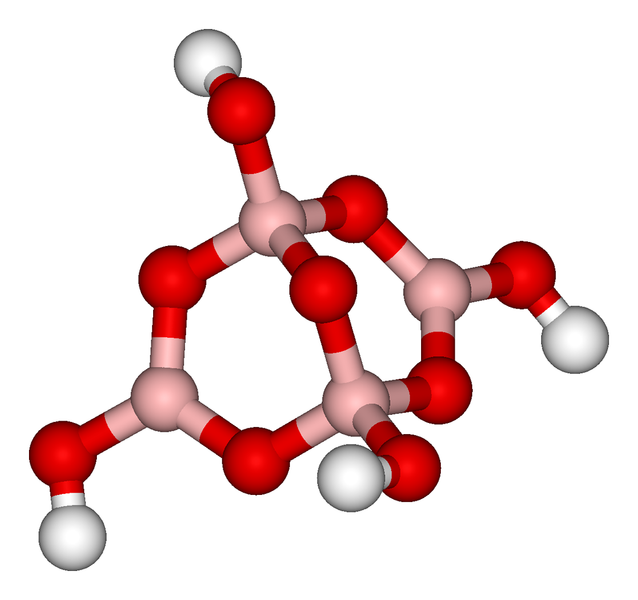 When you combine them, the sodium borate from the borax acts as a crosslinker to link the chains of polyvinyl alcohol together, resulting in a big gooey mass of slime.

(There's more to it, of course, but the full explanation I found from Newton Ask a Scientist is beyond me.)

NOTE: Real Silly Putty is made from boric acid and silicone, both easily-obtainable substances. However, I've seen the reaction to combine them described as "violent," so perhaps it's best to stick with Elmer's and 20-Mule Team -- at least at home!
Posted by Kathy Ceceri at 11:28 AM

hey, thanks for telling me this! i could really use this info for a science paper that i am writing

Thank you! I'm doing a project for chemistry and i was wondering if silly putty had a boiling or freezing point; and if so, what would they be?

I have been criticized for answering this comment rudely. The polite answer is, you must do the research on that one yourself.