If you've ever learned a new word you'd never seen before and then had it pop up 12 more times in the next week, you'll understand how this chemistry immersion course is affecting me. As the chemists I've been talking to keep pointing out, chemistry is everywhere, and everything is turning into a teachable chemistry moment.

So when my doctor sent me for tests to see if my thyroid was acting a little sluggish and the technician handed me a capsule containing 200 microcuries of I-123 and told me to come back in 6 hours, my first response was, "Can I bring my camera?"

Testing for thyroid function involves swallowing a radioactive isotope of iodine, which naturally

collects in the gland, so that a nuclear camera can detect how much of the chemical is being absorbed and create an image.

The capsule itself came in a hard plastic case that reminded me of the puzzle tube from The DaVinci Code. Inside was a test tube inside another test tube, and then the pill itself, which looked like ordinary cold medicine.

When I returned to the hospital in the afternoon, the first thing they did was compare the radioactivity of my neck, where the thyroid is located, with that of my knee. (They use the knee because it's about the same size around as the neck.) 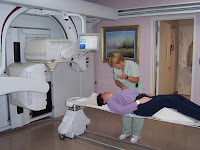 Then I was placed -- a little awkwardly, as you can see -- under a big nosecone that was 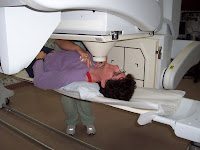 positioned above my neck.

One tech put a thin radioactive bar across my thyroid for the machine to focus on. Then I just lay there for five minutes.


The photos taken by the other tech shows the image appearing on the machine's screen. 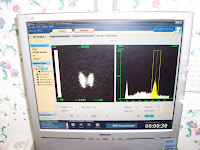 Iodine 123 is an isotope of regular Iodine, atomic number 53, the stuff they put on cuts when I was a kid. It emits gamma rays, but its half life is only 13.13 hours. The only caution I was given was to avoid eating fish, since it might add to the iodine in my system. The techs handled the capsule without any special shielding.

By contrast, when a friend of mine was given Iodine 131 about 15 years ago to destroy her overactive thyroid, she says the tech was covered in a lead apron and wore a big welders-type mask and gloves. The capsule was stored in a big case, removed with tongs, and dropped into a paper cup for her to swallow. She had to leave her house for a week to avoid contaminating her then year-old daughter.

Thanks to the nuclear medicine techs for answering my questions and allowing me to bring my camera into the room -- and for inviting me to bring the kids. (They didn't come though; couldn't convince them to get up so early!)
Posted by Kathy Ceceri at 10:19 PM