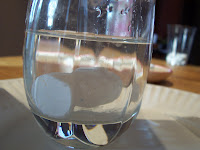 A big piece of sidewalk chalk sitting in a glass of vinegar, not really doing much of anything.
Lesson: Carbon dioxide is heavier than air
What Happened: CO2 collected in a glass can be poured out so that it extinguishes a candle

Last week a friend who used to teach chemistry at a local community college brought her son over for the afternoon. I had bought some Diet Coke and Mentos for the kids to try outside. My friend's son let my boys take his turn, while he played the role of "brave photojournalist."

I also got my friend to try a demonstration I read about in Uncle Tungsten, and which is mentioned in passing in Joy of Chemistry as an example of the effects of acid rain. It involves dissolving a piece of chalk in a glass of vinegar. My friend and I tried Crayola brand blackboard chalk from Wal-Mart but did not get much of a reaction. Old sidewalk chalk, much thicker and softer, worked a little bit. But for the second half of the demonstration, we had to resort to baking soda.
In Uncle Tungsten, Oliver Sacks describes watching his mother "pour" off the carbon dioxide accumulating in the glass over a candle, which goes out. That's the part of the demonstration I was interested in seeing. A small amount of baking soda and vinegar -- not enough to bubble out of the glass -- did indeed produce enough CO2 to recreate Sacks' childhood memory.

In addition to proving that carbon dioxide is heavier than air, we also demonstrated that even middle-aged moms like to mess around with concoctions. Sometimes more than their kids.

NOTE: Chalk is made of calcium carbonate, a base, the same stuff in limestone and marble. Vinegar is acetic acid. The reason our chalk didn't react very much with the vinegar was that it contained other substances. A little Googling revealed Prang Hygieia, 95% calcium carbonate, as the brand of choice for this demonstration. If I get ahold of some I will give it another go.
Posted by Kathy Ceceri at 9:10 PM

This experiment also works with shells as they are made up of calcium carbonate.

Thanks so much for this as I am doing an experiment on this for a school fair and i had the same trouble , thanks for the help!

My student and I had a similar experiment, and got the same results - barely nothing. We left the chalk-vinegar solution overnight with a balloon covering the bottle, but in the morning we only had a very small balloon. Almost nothing at all.

I did this in class it worked really well

I just collected some chalk from the ground near a chalk pit; it works a treat with both vinegar and lemon juice! You can see the bubbles fizzing off the chalk.

also works with antacid tablets like Tums, as they are mostly calcium carbonate, however, it works faster if you crush them :)

(also explains why you burp when you take them!)