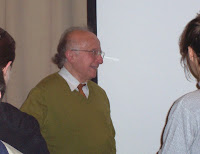 Went to the Roald Hoffmann talk last night. John (who just turned 15), accompanied me and said he enjoyed it. (It's Hoffmann's wry asides, missing in his video appearances, that make him so engaging in person.) In preparation, we watched the first episode of World of Chemistry online. Then I served two different enantiomers of carvone for lunch: homemade pumpernickel rolls with caraway seeds and spearmint candies. (The rolls came out a little dry; I'll have to find a better recipe.)

In our interview, I had asked Hoffmann what he does to make chemistry more accessible to laymen. He described a typical news item about science, a health story either touting a new miracle drug or decrying the fact that last year's miracle drug has been found to have dangerous side effects. He went on to say

The newspaper will never show a picture of the molecule. They’re deathly afraid to show the molecule. But they will use the name. So when I see that story, I go to Wikipedia and get the structure to show them, and go deeper into the story.

So I made sure to show the kids pictures of the right- and left-handed carvone molecules. And I will try to post images of molecules here whenever possible.

Again, if you can get to the Tang Museum to see the Molecules that Matter exhibit do so, if only to get to walk around the giant steel 3D molecular models. As Hoffmann pointed out last night, computer graphics have pretty much made model-building obsolete. But humans are sensory creatures, and the real-life experience is more profound than the most detailed rotating 2D approximation.
Posted by Kathy Ceceri at 9:54 PM