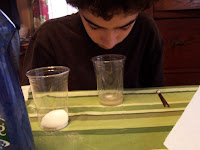 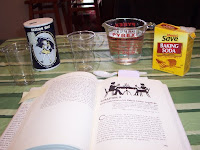 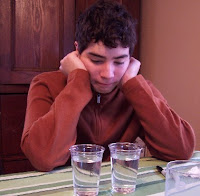 As an introduction to crystal-growing, I thought it would be helpful to talk about solutions. We did two experiments from Chapter 9 of The Joy of Chemistry: precipitating baking soda out of water using table salt (known as "salting out"); and salting out solid soap from liquid dishwashing detergent.

(You will notice that I thought it would OK to skip the hazmat gear for these demonstrations!) 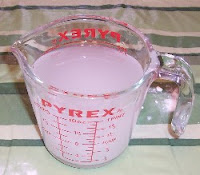 First we made a saturated solution of baking soda in water, by pouring four heaping plastic spoons of the powder (how's that for precision?) into 2 cups of water, stirring, and waiting for the excess to settle out.

Then I "decanted" off the liquid into a cup for each kid, who marked it and filled a second cup with an equal amount of tap water. Equal small amounts of salt were added little by little until a change could be detected.

As with most of the experiments we've done so far from this book, the results were very subtle. The baking soda solution became slightly cloudy when we added salt, as compared to a cup of plain water.

Then we got new cups, put about a quarter inch of dish detergent into the bottom of each and sprinkled it with salt. The directions were incredibly vague: "liquid soap" and "sprinkle" were all they said. Anthony only sprinkled a small amount, but I let John pour it on, just to see what would happen.

In both cups we got a goopy mixture in the liquid. The book referred to this as "solid soap." The kids called it "wet salt." I wasn't sure how to tell the difference. Some ways now come to mind: 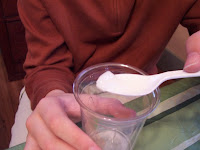