How do you find out what kids think of scientists? Have them draw a picture!

This week I was working on a story about CSI and how it's changed public perception. For DAs, the so-called "CSI Effect" has been a problem: juries expect to see the full array of high-tech analyses before they'll convict a defendant (whether it's needed to prove their guilt or not).

But for kids, the "CSI Effect" is different. Researchers have found that the typical scientist as drawn by middle school students is no longer a nerdy white guy in a lab coast with thick glasses and wild hair. In other words, they don't look like the fellow below, from today's Albany Times Union: 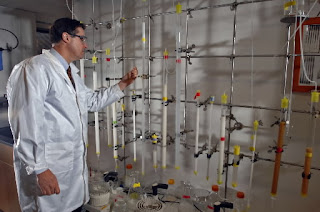 A Rensselaer Polytechnic Institute scientist has discovered a fact about mosquitoes that may turn the treatment model for malaria upside down.

"The mosquito is as much a victim as we are, but nobody thinks of the mosquito that way," said Robert Lindhardt, a biochemist and acting director of RPI's Center for Biotechnology and Interdisciplinary Studies.

Instead, they draw scientists who are more "realistic," researchers say. Something like the woman below, who plays a forensic scientist on CSI: Miami, as quoted in yesterday's Parade Magazine:

Q Your item on Emily Procter made me wonder: Why do she and the other women on the CSI shows, such as Marg Helgenberger and Melina Kanakaredes, choose to show so much cleavage?
—E.G.J., Lothian, Md.

A “You don’t really think we dress ourselves, do you?” asks Procter. Costume decisions lie with the producers and wardrobe staff, who seem to follow the philosophy “the deeper the cleavage, the higher the ratings.”

Having worked in forensics for five years, I guarantee that it's not as glamorous as portrayed on CSI. We are all running around in lab coats to spare our outfits from damage from bleach solutions that are frequently used (in DNA analysis anyway) and to keep protect ourselves when we handle tubes of blood and other thing. Most of us are in the lab doing the tests and writing the reports, not in the field collecting evidence. That is handled by the police officers trained as evidence technicians.

I haven't checked lately for accuracy on those shows, but I know the old X-Files episode claimed they could to get a DNA result in about 2 hours when I know for a fact that they technology they were using took about a week (from DNA extraction to final autorad). I was yelling at the TV when they said an autorad was PCR (polymerase chain reaction) when it was actually RFLP (restriction length fragment polymorphism). Ugh. So much for getting the facts straight, ma'am.

Speaking of not checking for accuracy, my post above has typos in it. sigh. That's what I get for not previewing it. Sigh.