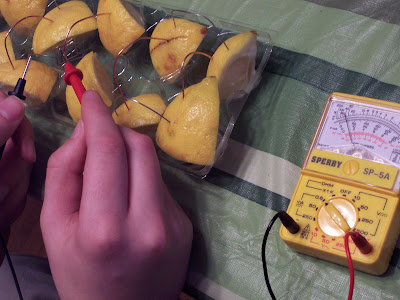 It's the new year, I've finally gotten a replacement for my dearly departed laptop and managed to wrest it into a configuration that allows me to sign in to my blog, so it's time to post more experiments.

The Lemon Battery is one I've been thinking about doing for years. There are many versions of it -- and many opinions about whether it actually works. Here are some of the different incarnations and explanations: 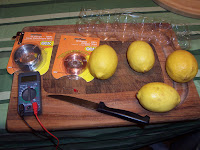 As usual, I took bits and pieces and put together a version that looked the easiest for us to do. Last summer I was hoping to work it into an alternative energy class I taught for the day I talked about how electricity works, and so I had bought copper and galvanized (zinc-coated) steel wire. I liked the idea I had seen about putting small lemons into an egg carton to create a bigger battery of cells, thereby upping the voltage and current. We had a bunch of lemons, but they were pretty large, so I had the kids cut them into quarters (per Hila Road's instructions). 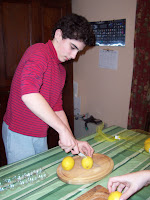 We rolled the lemons, without breaking the peels, to release the juice inside, cut up the lemons and put them peel side up in the egg cartons. Then we connected the lemon quarters into groups of four, using a piece of copper and a piece of zinc wire for each lemon cell. At that point we had six batteries of four lemon cells each, which according to Hila should have produced enough voltage and current to light an LED bulb.

At this point any semblance of scientific accuracy breaks down. 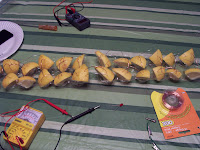 We never got the LED bulb to light. Ditto for the small watch-battery-powered calculator we tried. We did get readings on our multimeters, but I couldn't tell which was which. (I need to look at the instruction sheet to see which scale goes with what measurement.) And I tried to wire the 6 batteries of 4 cells in parallel, but realized afterward that I just connected the batteries in series, so maybe the amperage wasn't high enough. 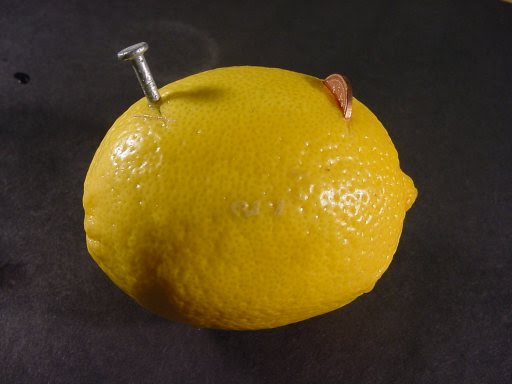 The kids wandered away at this point, but I want to try this one again (of course). I may use pennies (most places recommend sanding them a little) and galvanized nails as terminals, and just hooking the wire up between the terminals. And I'll have to look up (or ask my dad) about how to wire the batteries in parallel correctly.

For a look at people who DID make this experiment work, go to the links above. Or for a really amazing feat funny takeoff on this idea, go to GeekDad to see my post about the onion/Gatorade battery.

I've got a project to do for science at school. I chose this one. Can you tell me more about this experiment?

Wow..
Nice.. I am going to try doing this as a school project..
e-mail me: kim_amy11@hotmail.com

It cannot work if you join up the lemons using copper wires or zinc wires. That gives zero volts because the "batteries" are pointing towards each other. They have to all point back to front.

Also, the metals must go in the same direction all through the chain. Start at one end and make sure it goes zinc-copper, zinc-copper, for every lemon. For the ones on the end, use the opposite metal (so each end lemon still has a zinc and a copper.)

I am doing this experiment. Can you help me with the redox part and how the lemon battery actually works (like the science behind it). For my experiment I am using a copper wire, a zinc screw and lemon and for some reason when I hooked it up to the voltmeter it didnt work. Any ideas as to why this happened? Email me: nate-18@hotmail.com

Like everyone else on the Internet, I am not here to do your homework for you! Read my post, find out what I did wrong, and find some sites that show you how it works and why.