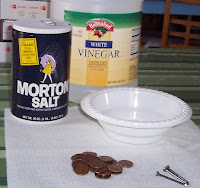 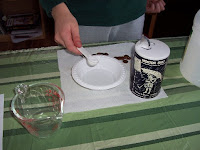 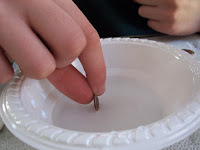 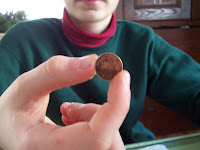 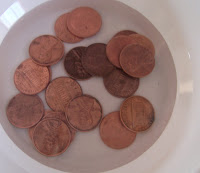 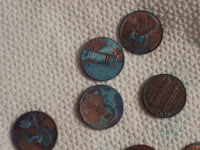 Lesson: Copper plus oxygen creates copper oxide (2Cu+O2-->2CuO )
What Happened: Changing the chemistry of pennies and nails changed their color

Anthony (perhaps inspired by a discussion of the construction of the Statue of Liberty in history this week) wanted to see if he could make a penny turn green by soaking it in water. I suggested we also try vinegar. Nothing very dramatic happened, so I looked it up and found this great demonstration on About.com's Chemistry page:

But here's the best part. Once we took out the pennies, we put some steel nails (I couldn't quite tell if they were galvanized -- zinc-coated -- or not) in the vinegar. Over the next few hours, the nails got a beautiful copper coating. Here's Anne Marie Helmenstine's explanation of what happened: The pennies react with the salt/vinegar solution, releasing positively charged copper ions. The vinegar also dissolves the iron and oxides on the surface of the steel nail, giving it a negative charge. The positively charged copper ions are more strongly attracted to the nail than the iron ions, so a copper coating forms on the nail. 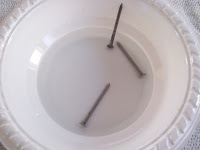 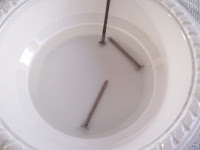 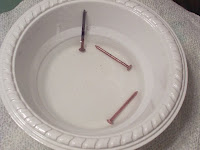 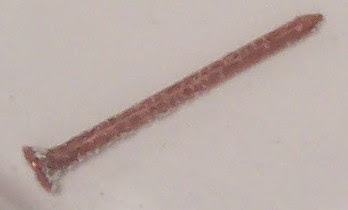 During the process, the hydrogen ions from the vinegar (acetic acid) and the metal/oxides produced bubbles of hydrogen gas.

Although it took longer than advertised, the end result was impressive. Most impressive was finding a way to do copper plating without using CuSO4 (one of the caustic copper sulfate experiments from Joy of Chemistry that I had been avoiding doing). 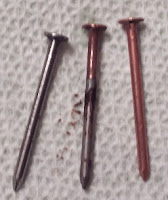 Update: Works on paperclips, too! 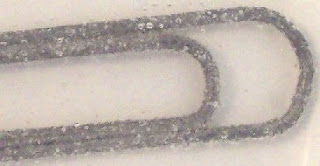 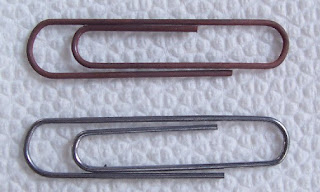 Here's a site that gives all the chemical equations involved.
Posted by Kathy Ceceri at 10:02 PM

I love your site! I tried to find a way to contact you to discuss possibly exchanging some web content so we can have our users find each others sites.
Please contact me at my email address and we can arrange something.

I believe what's really going on is a standard redox reaction: Cu+2(aq) + Fe(s) --> Cu (s) + Fe+2(aq). This reaction is definitely spontaneous (the reduction potential of Cu+2 in acidic solution is +0.16, for Fe+2 is -0.44 for an overall reduction potential of the reaction of -0.28), so would happen in solution without requiring any electrical charge to push it through.

It's not simply positively charged copper ions being attracted to the negatively charged nail -- the ions have to be reduced in order to plate out onto the iron.

Love this post! It really helped A LOT with my science experiment on copper plating. Thanks!

Thank you for this formula. However, I found that distilled vinegar at 5% does not work. Had to check with several neighbors to get the right one. I am making copper jewelry and want the verdigris instead of the black from liver of sulfur.