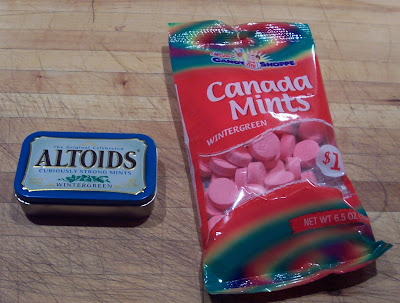 Lesson: Breaking molecular bonds can release energy in the form of light
What Happened: We crunched Altoids in a dark room and saw blue-white sparks.

Traditionally, this demonstration is done with Wint-O-Green Lifesavers -- but the package I found at the supermarket listed only artificial ingredients. What makes the candy spark visible is the fluorescent property of wintergreen's aromatic essence, methyl salicylate. So we tried Altoids and Canada Mints. At night, we went into the bathroom (so we could see ourselves in the mirror), turned off the lights and waited a few minutes for our eyes to adjust to the dark. The Altoids worked well. The Canada Mints are slightly more chewy and hence, did not crunch well.

Triboluminescence occurs when molecules, in this case crystalline sugars, are crushed, forcing some electrons out of their atomic fields. These free electrons bump into nitrogen molecules in the air. When they collide, the electrons impart energy to the nitrogen molecules, causing them to vibrate. In this excited state, and in order to get rid of the excess energy, these nitrogen molecules emit light -- mostly ultraviolet (nonvisible) light, but they do emit a small amount of visible light as well. This is why all hard, sugary candies will produce a faint glow when cracked.

Although it was fun to watch the bright flashes of light in our mouths, we had to stop after a few candies because the sharp mintiness got to us.

A photo of the flash, from Wayne's This and That:

Interestingly, as I learned from Wikipedia, methyl salicylate, or C6H4(HO)COOCH3, is what gives Ben-Gay its minty heat. It can cause poisoning and even death when eaten or applied to the skin in large amounts.

Minty coolness happens because mint temporarily deadens the nerves in the mouth that sense heat. Spicy peppers feel "hot" because the cause pain in certain nerves that sense pain as heat.