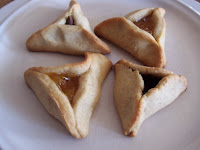 We made Hamantaschen cookies for Purim and the question came up about the difference between baking soda and baking powder. We have done the baking soda and vinegar thing many times, so we already know that mixing sodium bicarbonate with an acid releases carbon dioxide. When you bake, those little bubbles of CO2 make the bread puff up. The acid needed to start the reaction in a batter can come from yogurt, buttermilk, lemon juice, or even molasses or honey. Baking powder is baking soda with the acid already mixed in, in the form of cream of tartar. When moistened, powdered acid combines with the baking soda and produces the requisite bubbles. Some baking powder is "double acting," meaning it releases most of the bubbles when heated, so that the leavening action doesn't expend itself while the dough is waiting on the counter to bake.

Baking powder and water fizzing
There are many explanations on the web about this topic, but I like this one from something called Wally's Food Company. Scroll down to read the chemical explanation of why baking soda absorbs odors in the refrigerator.