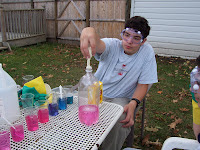 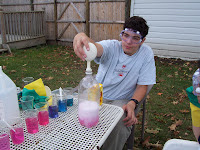 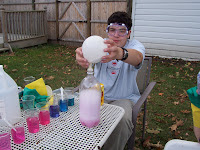 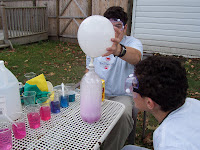 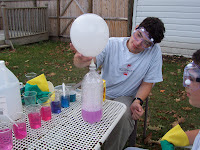 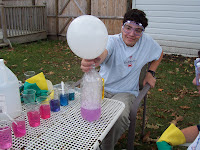 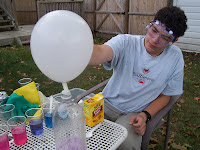 Yesterday we did our first demonstration from the book I will be using as the “spine” of my curriculum: The Joy of Chemistry: The Amazing Science of Familiar Things

(My younger son had already tried the other half of this demonstration a few days ago. He made what chemists call Oobleck from corn starch and water. The resulting colloidal mixture has both solid and liquid properties, but no chemical change results. Just a sticky film on the back deck.)

It started off with two processes I knew I could handle: making red cabbage pH indicator, and mixing baking soda and vinegar. But since it brought up the subject of pH, I combined the book's demonstration with one I found on the About.com Chemistry section. First, I had the kids chop up half a red cabbage and put it in a large ziploc bag. Then I added an equal amount of water and put it in the microwave for a couple of minutes. Opening the ziploc top just a tiny bit made it possible to pour out the resulting bluish liquid without too much of the cabbage spilling out.

I then gathered together some of the stuff mentioned in the About.com article and took it all outside to the backyard. I filled several study clear plastic cups with pH indicator and let the kids try adding a little of each of the substances one by one: baking soda, vinegar, lemon juice, citric acid, cream of tartar, Sprite and some spray cleaner (I thought it contained ammonia, but later saw on the label that it did not). We ended up with a nice variety of shades ranging from pink to turquoise.

The book called for creating an "explosion" by corking a soda bottle filled with vinegar and cabbage juice. Instead of trying to find a cork that fit, I used a trick I saw Bill Nye the Science Guy demonstrate once on Mr. Rogers' Neighborhood. I took a balloon, had the kids put a couple of spoonfuls of baking soda into it using a funnel, and pull the end of it over the top of the soda bottle. Then at the appointed moment, one of them lifted the balloon and shook the contents into the bottle. The result was satisfying, if not dramatic.

luv the photos that accompany this!