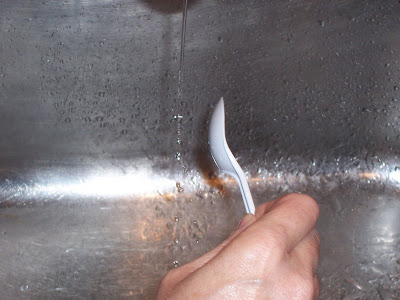 Chapter 1 in The Joy of Chemistry

is "Electrons and Atoms, Elephants and Fleas" (a good picture to help you remember the relative size of an electron compared to an atom's nucleus). The boys rubbed plastic spoons on their hair and then held them next to a tiny stream of water. The stream bent toward the spoons, very slightly. We tried the demonstration again later in the week, when the weather was damp, because I read elsewhere that it would work better when there was some humidity in the air. (I can't find the site now, but rubbing the spoon on nylon was supposed to create an opposite charge, so that you would be able to get the two spoons to attract each other; didn't work, though.) 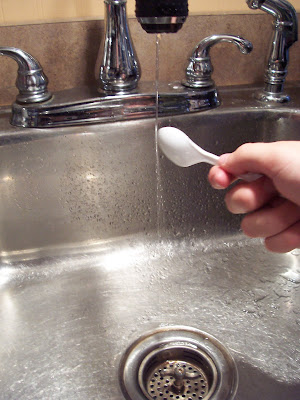 After the demonstration, I read most of the first chapter out loud. I'm finding myself trying to throw in extra information from later chapters, which just gets confusing, so I'm going to try to restrain myself. I think going through the book, in order, will give the kids a good idea of the basic ideas.

At the same time, I'm hoping the demonstrations we try out in the course of this project, both from the book and the "enhanced" versions I can't resist digging up online, aren't as underwhelming as this one. It's discouraging when something doesn't work at all, and of course the kids just find it dull. It can be hard to get things right the first time, though, so maybe finding photos and/or videos will be helpful in finding the demonstrations most likely to succeed.
Posted by Kathy Ceceri at 12:09 PM