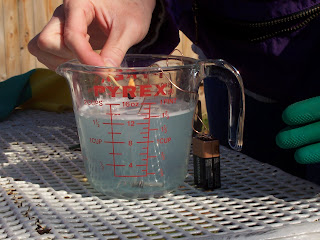 Lesson: Splitting molecules
What Happened: Hydrogen and oxygen bubbled off of electrified wires

What am I doing with the match? Trying to make hydrogen pop.

We had a few free minutes this morning, and it wasn't too cold outside. So I thought we'd try a quick experiment that Theodore Gray describes which uses a 9V battery to separate water into its component hydrogen and oxygen atoms. Anthony set this up, and John took the photos. 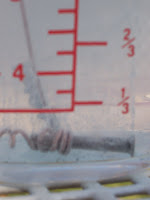 Attach two conducting wires (we used uninsulated copper) and two metal rods (copper brads from a science kit we had lying around) to the battery. Place in a cup of water so that they don't touch. H will form on one lead and oxygen on the other.

We did get a ton of bubbles, especially after adding the recommended tablespoon of salt to the water.

Gray then goes on to suggest using a match to test which is which. The hydrogen, which is explosive, should pop or crackle. The effect, if present, was very subtle. We also added dish detergent, which from the description we thought would make soap bubbles float into the air. The glass developed a nice head of foam after a few minutes, but no bubbles of hydrogen sailed away. 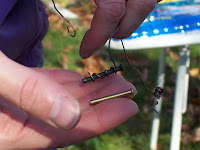 The salt, Gray said, would produce chlorine gas, which would smell vaguely like a swimming pool. There was definitely a smell, but not recognizably chlorine. (Of course, we were outside, taking advantage of the good ventilation.) The water did attain a nice blue shade, which in retrospect I think may have been from the oxidation of the copper brad. And the hydrogen terminal turned a tarnished green fairly quickly.

Finally, at the end we were left with a flaky black precipitate at the bottom of the glass. I'm thinking sodium, from the break-up of the salt. Gray doesn't mention it; I'll have to check that out.

Here is an interesting note he adds about the experiment:

This is also the only simple experiment you can do in which, in a very real sense, you create the atoms you're collecting, rather than just separating and purifying them. Think about what a hydrogen atom is: It's nothing more than a single proton, captured in a cloud of negative charge from the electrons surrounding whatever compound it's part of. When you use electricity to split water, you send an electron from the battery down into the water, where it finds a water molecule, rips off a proton, and the proton and electron combine to form a hydrogen atom. (Technically, two electrons rip off two protons and form a molecule containing two hydrogen atoms, but that's a detail.) The point is that by adding electrons to water, you are creating hydrogen atoms out of two subatomic particles. In virtually every other chemical reaction the atoms already have lots of electrons around them, and you're just making changes around the edges. But here you're making the atoms up pretty much from scratch, no accelerator or nuclear reactor required, just a 9V battery.

Now, according to a NASA website, Gray's explanation is not quite accurate:

Electrolysis of an aqueous solution of table salt (NaCl, or sodium chloride) produces aqueous sodium hydroxide and chlorine, although usually only in minute amounts. NaCl(aq) can be reliably electrolysed to produce hydrogen. Hydrogen gas will be seen to bubble up at the cathode, and chlorine gas will bubble at the anode. ... Oxygen is not given off in this experiment. That's because the oxygen atoms from the water combine in the liquid with the salt to form hydroxyl ions. Salt's chemical formula is NaCl - sodium chloride. The chorine gas is from the chloride in the salt. The oxygen in the hydroxyl ions stay in the solution. So what is released in this reaction is not oxygen but is chlorine gas that collects around the electrode tip.

Demonstrating yet again the danger of trying to teach a subject I don't quite understand. I will have to look into this a little further.

My daughter and I did this experiment today using a small glass of water, 2 tsps. salt, a 9-volt batter, and 2 lengths of bare copper wire, one attached to each terminal of the battery. After the experiment had settled for a few hours, the water was clear, but there appeared to be a white powder (salt?) and a dark yellow powder on the bottom, and a fluffy-looking light green substance suspended in the water about 1/4 to 1/2" above the bottom. I'm trying to figure out what they might be. Maybe sodium and copper oxides???

Hi Helen -- I hesitate to even guess. But since sodium is yellow and copper is green, you may be on the right track.

Your best bet may be to try one of the "Ask the Scientist" websites. If you find out, let me know! ...kathy