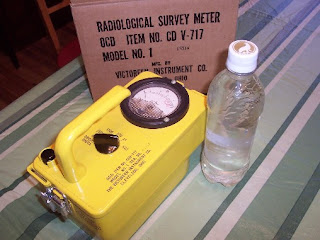 I became interested in radioactive elements after my brush with thyroid medicine, and I started looking on eBay for a cheap Geiger counter. (My dad, who worked with X-ray machines, brought one home and demonstrated it for us when I was a kid -- another example of how early impressions about science can stick with you.) Before I could finish my research, a friend bought one for us. Turns out, what we actually have is a radiation detector intended for survivors of nuclear war. As one site I read said, if this thing shows a reading, evacuate! 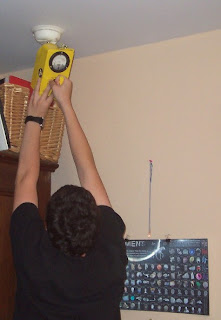 So when I wanted to look at some common household radioactive items, we still didn't have anything to measure them with.

So we found some nice videos on YouTube from people who did have real Geiger counters.

Among the radioactive items people collect or have about are:

But here in Saratoga Springs, NY, we have one source of radioactivity that is less common: mineral water.

Back in the 1800s, Saratoga was known for its horse racing, its casinos, and its spas. Its many springs, the result of a geological fault which runs right through the center of the city (it's a low point known until recently as "The Gut", but now the source of trendy new restaurants). Apparently radioactivity is one requirement for "really good" mineral water. 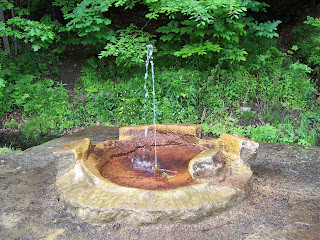 The radioactivity comes from radon gas -- the same stuff that accumulates in basements, a by-product of the decay of uranium -- dissolving in the water underground. Once in the air, the radioactivity dissipates quickly, with a half-life of about four days.

Nevertheless, for the sake of science, we took a walk over to the Saratoga Spa State Park and collected a few bottles from the Polaris spring, one that is known to be radioactive. We also took a sip (it's carbonated but pretty sulfurous, so you wouldn't want to drink it regularly anyhow). So far, no one is glowing in the dark. 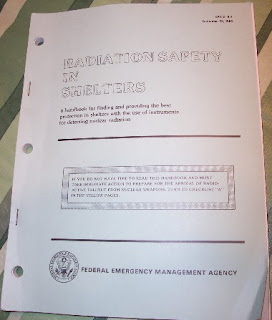 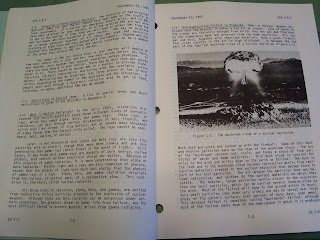 The radiation detector wasn't a total loss: it came with a really enlightening manual about radiation safety, for perusal in your fallout shelter. This article from the World Nuclear Association is also basic enough for kids. You'll also find all kinds of fascinating information about radiation at Theodore Gray's Periodic Table.

I'm still planning to get a working Geiger Counter, and maybe a few odds and ends from United Nuclear.