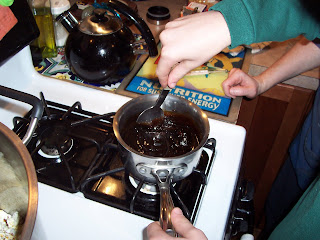 We made molasses popcorn balls for our homeschool bookclub meeting. Making candy involves heating the sugary mixture to different temperatures according to the texture you're looking for -- sticky, stretchy, chewy, hard, etc. We used a candy thermometer I happened to have as well as the "drop some in a cup of cold water" method, until we got the texture we wanted.

The molasses actually came out pretty good (one of the moms couldn't stop eating it; I finished off the leftovers this afternoon). But I had made the popcorn in a big spaghetti pot and didn't take out all the unpopped kernels in the bottom, so they got stuck into the balls as well. I made a note in the recipe for next time.

Here's the recipe (reduced by one-fourth, because of the size of the molasses bottle we used): 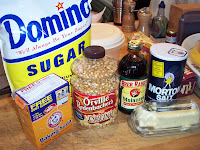 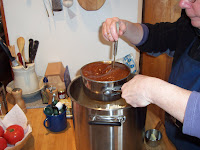 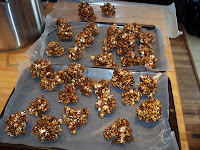 Remove from heat, add baking soda and mix well. It will froth over.

Pour over popped corn, stirring so that each kernel is coated.

Form into a ball with well buttered hands QUICKLY! Place on waxed paper to cool. 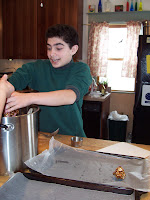 The graphic above illustrating the science behind candy hardening is from The Exploratorium's interesting Science of Cooking webpages.
Posted by Kathy Ceceri at 12:24 PM